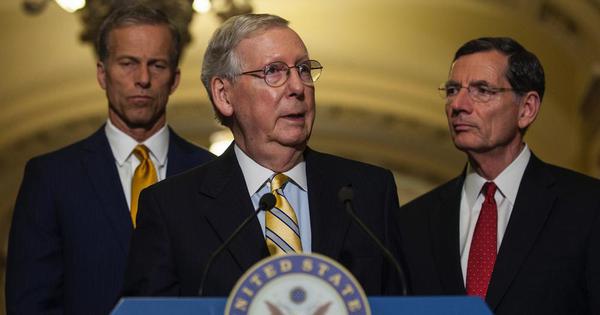 How Many Votes Does The GOP Need For The Health Care Bill?

On Tuesday, Senate Republicans are set to vote on heath care legislation. Many people are closely following the upcoming vote due to its controversial nature, as legislative sparring over health care reform has dominated much of Congress' year thus far. As the vote approaches, many Americans are probably wondering how many votes the GOP health care plan needs to pass — and whether or not the party has enough votes to proceed with the legislation. Tuesday's vote is actually a vote on whether or 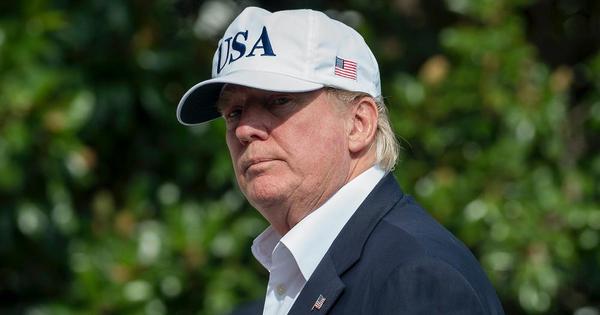 As Hurricane Harvey continues to substantially impact the state of Texas with torrential rains and flooding, the storm's devastation has unfortunately also served as a reminder that, earlier this month, President Donald Trump rolled back flood regulations designed to help infrastructure survive catastrophic weather events. While this news was announced in mid-August, it is particularly jarring to reflect upon in the wake of Harvey's destruction. The Federal Flood Risk Management Standard, the f 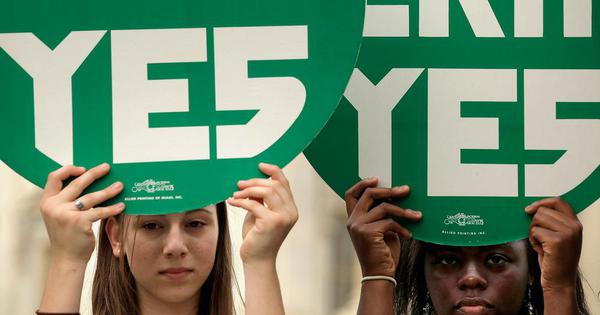 As allegations of sexual assault against a myriad of high-profile men continue to emerge, there is now a renewed push to ratify the Equal Rights Amendment (ERA). Advocates note that the pervasiveness of sexual assault, illustrated by the #MeToo campaign, highlights exactly why the ERA needs to be made law. The ERA is a proposed constitutional amendment that would guarantee American women equal rights under the law. It was passed by Congress on March 22, 1972, and then sent to the states for rat 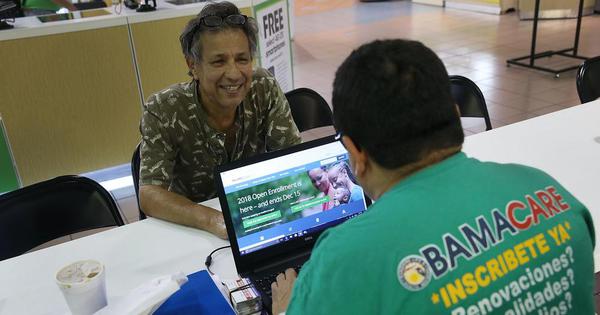 What Does Trump's Freeze On Obamacare Payments Mean? Premiums Could "Significantly Increase"

On Saturday, the Trump administration announced that it is freezing key Obamacare payments intended to stabilize the insurance marketplace. Following this announcement, you might be wondering what Trump's freeze on Obamacare payments means for you. Unfortunately for recipients of Obamacare, the suspension of these payments could mean that premium rates increase substantially in 2019. As the New York Times described, the Trump administration is suspending what are known as risk adjustment paymen 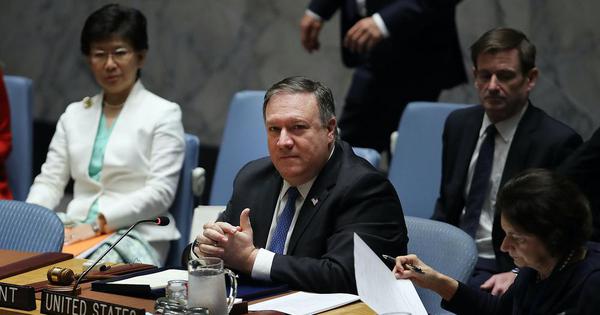 Last week, internal Trump administration documents revealed possible plans for foreign policy protocols that could have devastating effects on women and girls worldwide. These documents showed that Trump's State Department may ban "sexual health" phrases from diplomats' rhetoric — something which could have widespread implications, as Foreign Policy (FP) reported. Bustle reached out to the Department of State for comment on the issue. FP noted that it acquired internal memos from the Department 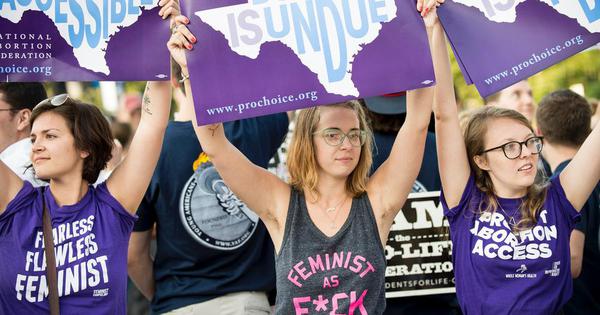 What Are "Abortion-Out-Loud" Bills? Advocates Have A Compelling New Strategy To Secure Access 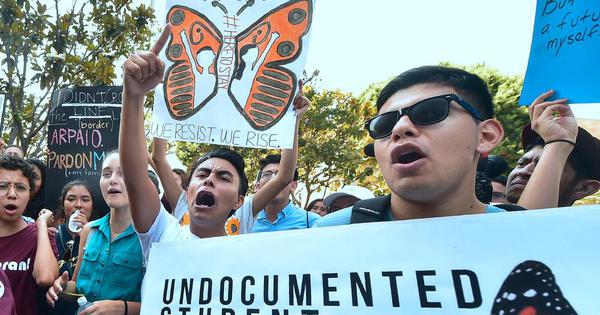 How Many Dreamers Are In The U.S.? Killing DACA Would Have Consequences You Can't Fathom

On Sunday, news emerged that President Donald Trump has reportedly decided to end the Deferred Action for Childhood Arrivals (DACA) program. If the policy is canceled, it would end the legal status of DACA recipients, who are often referred to as "Dreamers." Terminating the DACA program could have profound implications, especially considering how many dreamers are in the United States — close to 800,000. DACA was created in 2012 by President Barack Obama as a way to grant renewable legal status 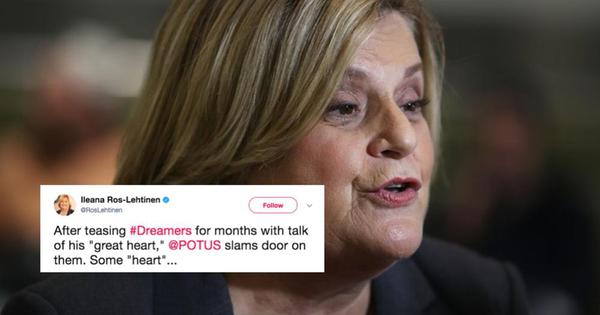 On Sunday, news came out that President Donald Trump has reportedly decided to end the Deferred Action for Childhood Arrivals (DACA) program, something which would place the lives of hundreds of thousands of DACA recipients — otherwise known as Dreamers — in lurch. In response to this news, many legislators, including some Republicans, have been heavily critical of the prospect of ending the DACA program. Indeed, this one tweet about DACA from Republican Representative Ileana Ros-Lehtinen epitom 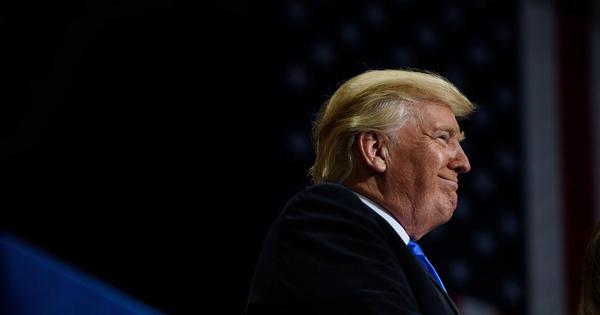 In the wake of the Charlottesville tragedy last weekend, you might be wondering what could have been done to prevent it from happening. Unfortunately, some programs that work to counter the white nationalism and violent extremism that contributed to tragedies, like Charlottesville, had their budgets slashed earlier this year. Indeed, Trump's administration decided to cut federal funds for programs that combat white nationalism. Instead, those funds could be going toward programs working to end I 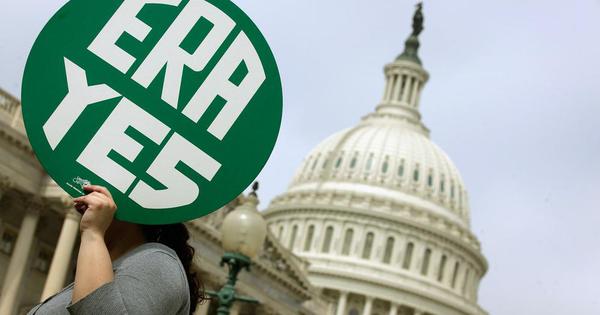 Wednesday, March 22 marks the 45th anniversary of the congressional passage of the Equal Rights Amendment (ERA). However, while the amendment passed through Congress decades ago, it has not yet been ratified by three-fourths of the states and is therefore not law. But securing ratification of the Equal Rights Amendment is no less important years later. Even though women's rights have come a long way over the past few decades, it is nonetheless imperative to have equal protections for women codif 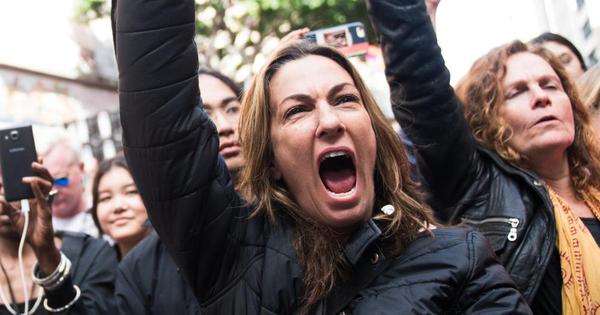 Here Are Just Some Of The Women's Rights Casualties Of "Trumpcare" 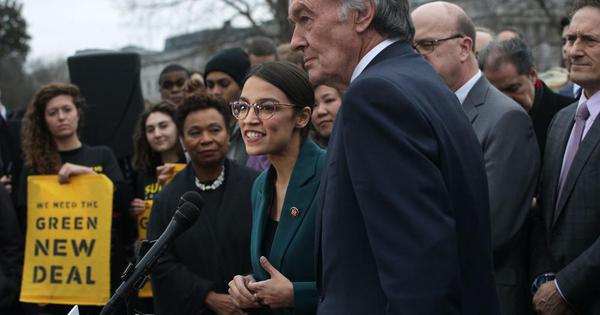 How Much Would The Green New Deal Cost? There Could Be An Important Trade-Off At Play

On Feb. 7, New York Congresswoman Alexandria Ocasio-Cortez unveiled a congressional resolution on her Green New Deal. The congresswoman's initiative proposes that the United States implement a host of new environmental and social policies over the next ten years. In light of the many policy proposals it contains, you might be wondering how much the Green New Deal would cost. Some believe that carrying out the resolution would be quite pricy, though Ocasio-Cortez thinks that many of these costs c 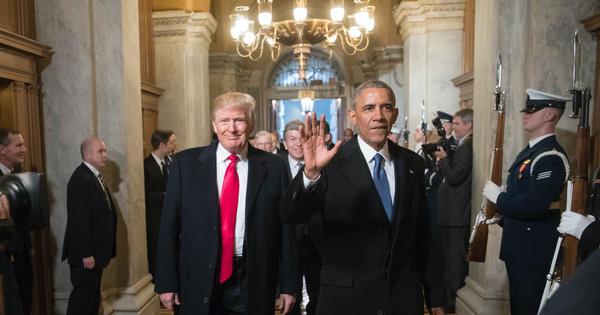 Donald Trump was inaugurated as president of the United States on Jan. 20, 2017. Since then, he has run an administration vastly different than that of his predecessor, Barack Obama. Moreover, Trump has killed many Obama policies that were once considered hallmarks of the 44th president's administration. The number of Obama-era policies that Trump has ended is quite extensive and the issue areas covered by these policies are vast. They include everything from women's rights to immigration, work 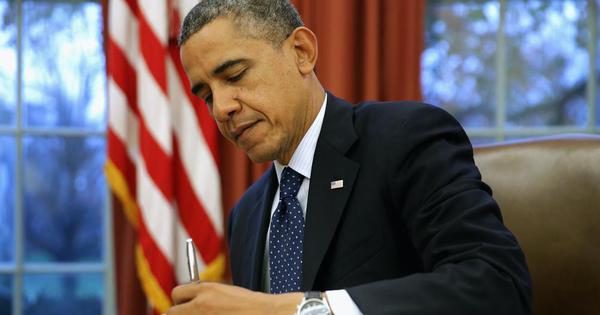 On Feb. 15, President Donald Trump declared a controversial national emergency to allocate funds to build a wall along the southern U.S. border. Amidst chatter about when it's appropriate for a president to declare a national emergency, you may be curious whether previous presidents made emergency declarations, and why they did so. Indeed, this list of national emergencies Obama declared shows the 44th president didn't shy away from the action — and that he issued declarations primarily related 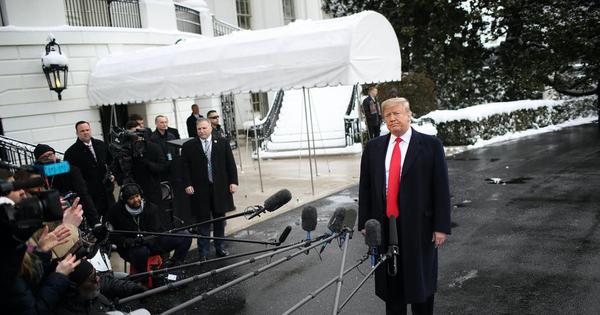 On Tuesday, Democratic lawmakers re-introduced a bill establishing federal penalties for attacks on journalists amidst an increasingly hostile media environment. The Journalist Protection Act confronts Trump's "hostility toward the press" head-on, as the bill's sponsors have accused the president of helping foster anti-press sentiment in the United States. The bill was re-introduced to Congress by Senators Richard Blumenthal and Robert Mendez, along with Representative Eric Swalwell. The Hill r 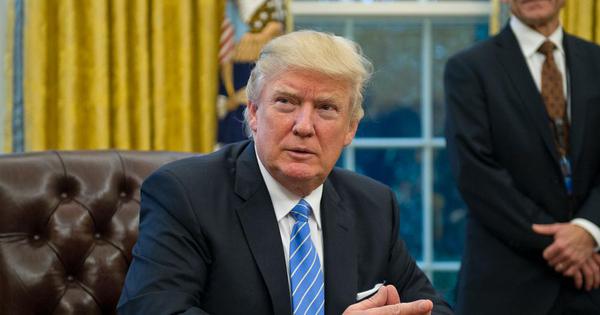 President Donald Trump's ban on transgender individuals serving in the military may not go into effect after all. On Tuesday, a federal judge announced that Trump's transgender troop ban can't be implemented, saying that a court injunction from 2017 prohibits the administration from moving forward with the ban. The judge's notice stands in contrast to the Pentagon's recent communication on the policy, with the agency announcing in a March memo that it would be enforcing the ban beginning in Apri 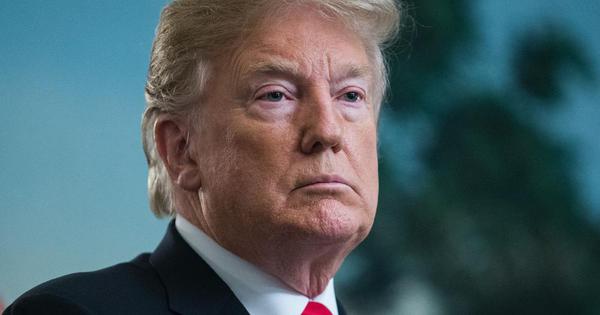 On Tuesday, the president signed an executive order directing federal agencies to examine a somewhat surprising topic. Trump's latest executive order addresses the threat of electromagnetic pulses (EMPs), which are essentially energy bursts produced by solar storms or nuclear explosions, The Hill explained. As the outlet described, Trump's order is focused on ensuring that American infrastructure is protected if a hypothetical EMP event were to occur. As Business Insider reported, EMPs can occu 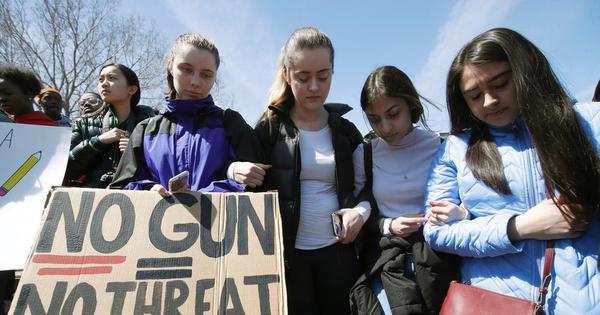 This week, Colorado lawmakers made it clear that addressing gun violence is a priority for the state. Colorado's "red flag" gun bill is one step away from becoming law, meaning that law enforcement authorities in the state will likely soon be able to confiscate the firearms of individuals who have been deemed a threat to themselves or others. If the governor signs the bill, Colorado will join a handful of other states across the country with similar measures in place. As CNN reported, the red f 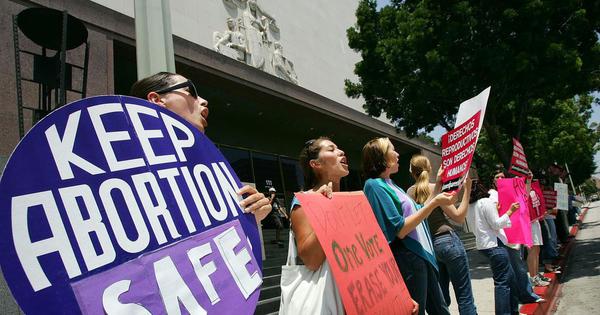 A controversial anti-abortion bill was recently introduced into Louisiana's state legislature by a somewhat surprising source. A Louisiana Democrat introduced a "heartbeat" abortion ban that would outlaw abortions once a fetal heartbeat can be detected. With the bill's introduction, Louisiana joins a host of states around the country that have sought to advance similar bans. The new bill is known as SB 184 and it "prohibits the abortion of an unborn human being with a detectable heartbeat." NOL 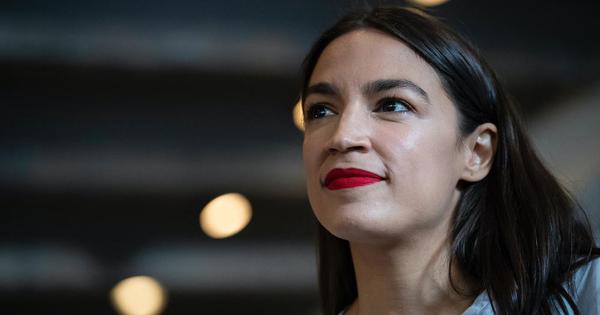 An unlikely political duo may soon be adding another policy issue to their legislative agenda. Ted Cruz wants Alexandria Ocasio-Cortez to work with him on a bill to make birth control available without a prescription in the United States. If the congresswoman agrees to Cruz's proposal, this would mark the second piece of legislation on which the conservative Republican and progressive Democrat have agreed to work together. Cruz's proposal came after Ocasio-Cortez shared a tweet on June 7 that r
Load More Articles
Close ✕